I’ve made it to the half-way point of my 30-Day Challenge!  Already I feel a million times better than I did on Day 1 (that is a technical measurement).  Now that my practice is pretty much back to where it used to be, I feel as though I can finally get back to goals that I had set for myself a while back.  One of those goals was to attain a full Hanumanasana, or split pose.

Not me…my hair is curly…

Since I have been noticing greater flexibility in my hammies, I decided to choose a practice that would stretch and lengthen my hip flexors, which are extremely important factor in whether or not you can do Hanumanasana.  I chose Lunging into Freedom from Yoga Today.  It is a shorter practice, and feels even shorter because she includes a guided savasana in there (often they will lead you into savasana and then advise you to stay for 5-10 minutes) but man, was it effective.  Some of the lunges (including lizard pose) were extremely intense and had me focusing on my breath to get through them.  Yet, unlike some hip-focused classes, this one was quite balanced, with plenty of vinyasas to get in a bit of upper body strengthening and bridge poses to clear the hips after the deep lunging.  Next up, I’ll choose a class that includes Hanumanasana to see if I’ve made any progress!

Yoga Snax Remix:  Remember this scrumptious treat that I wrote about last year?  Well I was really in the mood for some avocado toast today, so I made quick work of toasting some good 7-grain bread and mashing a perfectly ripe avocado…only to realize I didn’t have any lemons or limes!  It crossed my mind to just salt the avo and put it on the bread, but that seemed boring.  I scanned my kitchen cabinets, saw the balsamic vinegar and was reminded of the awesome bruschetta I shared with my best friend last week at Eataly.  So with that inspiration, I drizzled a little balsamic over the avocado-blanketed toast (rather than mixing it in with the avocado like I would the lemon–a little balsamic goes a long way, trust me) and I have to say–it was pretty delicious.  Creamy avocado mixed with a little salt was nicely complimented by the sweet balsamic.  Give it a try some time!

I may not have blogged yesterday, but that doesn’t mean that I forgot to practice.  I had to catch a bus to Philadelphia in the morning, so it was this handy-dandy Yoga Today practice for me.  It ended up being a great mix of hip openers and strengthening core and arm balances.  There is a misconception that you have to be super strong arms to accomplish arm balances, but in fact, a strong core is really the key; Neesha’s inclusion of knee-to-nose planks and navasana (boat pose) were not only strengthening, but also got the core muscles firing, making it easier to tap into that strength when it came time for the arm balances.  However, I especially needed the hip openers since I had a long bus ride ahead of me.

Today’s challenge was finding time to practice.  As I said, I’m in Philadelphia for the weekend with the man-friend, who so kindly invited me to join him on his work trip.  Since he didn’t have to work until later, we had a long, leisurely brunch at a restaurant called Farmicia, which turned out to be an amazing recommendation from my friend Lindsay.  We feasted (not an understatement) on baked Brie, french toast with apple-cherry compote and a mexican omelette with potatoes, after which our waiter had to roll us out the door.  So. Good. 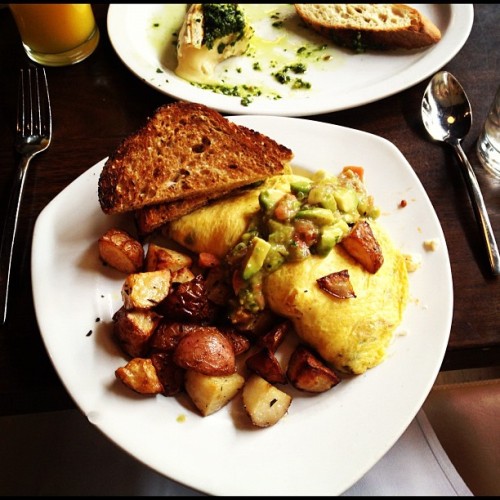 After that, the man-friend had to go to work, which would have provided a perfect time to do yoga….except that too much food had happened.  I was also torn because the Jets game is on, and for those of you who know me, know that the NFL is a fall sunday staple for me.  So what to do?  I made a pretty fair (if I do say so) compromise:  I watched the first half of the game, and then found this 30-minute practice from Sarah on Yoga Today to do during halftime (and a little bit of the 3rd quarter).

Just a few notes on this practice:  There is a lot of intense hip-opening, which is necessary to prepare for Bird of Paradise pose in under thirty minutes, but was a little too intense for someone like me who has very tight hips.  I was also having an off-day concentration-wise (which I think can also be a symptom of squeezing in your yoga practice rather than having a time carved out for it).  But overall, it’s a good practice when you’re short on time.

Alright guys–that’s it for today!  Time to go enjoy more of  Philadelphia on this fine Sunday (i.e. head to a bar to watch the afternoon games :))